Shipping in 24/72 hours (working days and products in stock)

In 2006, Stefan Everts was reigning world champion (with a mere 14 victories in 15 Grand Prix) and then he became KTM Race Director. Back then, he could already see where the future of motocross was heading and in KTM he found an ideal partner for his vision: efficient and maximum practicable performance from smaller displacements in an overall package that's tailored unconditionally to the requirements of the rider. 4 years or so later, it's ready: the new 350 SX-F. With a new engine, fuel injection system and smaller displacement, new bodywork, new chassis - in fact, a whole new concept.

3 other products in the same category: 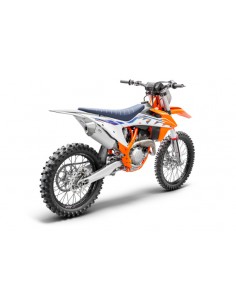 We use our own and third party cookies to collect information to improve our services and to analyze your browsing habits. If you continue browsing, it means acceptance of the installation of the same. You can configure your browser to prevent its installation. More information about cookies.